Kenjutsu through his Plasma Sword

Black Hayato (also known as B. Hayato) is a character from the Star Gladiator series. He is the evil version of the series' lead character Hayato Kanzaki and he is playable in the second game, Plasma Sword, though technically, he first appeared in the original Star Gladiator title, but as a palette swap of the original Hayato.

In his last fight against Hayato, Bilstein had managed to implant a "genotype" microchip in the protagonist. The microchip eventually took control of Hayato and transformed him into Black Hayato: a cruel and ruthless swordsman with a cold and emotionless personality. Like his good counterpart, B. Hayato fights with a Plasma Sword.

While B. Hayato is evil, he still hates Bilstein for what he did and he'll attack and eliminate anyone and anything who gets in his way. If the player beats the game with B. Hayato, he'll try to kill June on sight, but the small bit of consciousness that Hayato has left will attempt to stop him. Should B. Hayato win, the effects of the microchip will remain permanent and the real Hayato will be gone forever. It should be noted that in Gantetsu's ending, B. Hayato is shown as a separate entity from the original Hayato, when he is actually in the latter's body.

Black Hayato appeared as a card in SNK vs. Capcom: Card Fighters Clash.

He also appears as an rival unit in the crossover tactical RPG, Project X Zone 2. 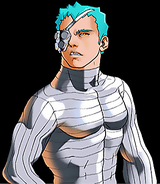 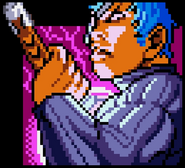 Black Hayato in SNK vs. Capcom: Card Fighter Clash
Add a photo to this gallery
Retrieved from "https://capcom.fandom.com/wiki/Black_Hayato?oldid=134436"
Community content is available under CC-BY-SA unless otherwise noted.