Bitores Mendez (voiced by Jesse Corti) is a character from the Resident Evil series of horror games. He appears in Resident Evil 4 as the village chief whom Leon S. Kennedy faces at the beginning of the game.

Some of his distinguishing characteristics include his imposing stature, fake left eye and resistance to firearms. In addition to commanding several possessed villagers, Mendez possesses superhuman strength, as well as a large Las Plagas parasite inside of him.

He leads the hunt for Leon and Ashley Graham early in the game, leaving behind notes of his strategies to trap the two. Mendez is the last "boss" enemy the player will face during the village portion of the game.

When Leon first encounters Mendez, he is unable to subdue the chief and is knocked unconscious. Later, Mendez begins to strangle Leon, but reconsiders once he realizes that Leon is infected with a Las Plagas parasite. If Leon pursues Mendez after that point, Mendez will attempt to kill him again, but will be distracted by Ada Wong and will leave Leon to chase her.

In the final confrontation, Mendez traps Leon in a building by twisting the metal door handles together with his bare hands. After being damaged by an exploding gas barrel, Mendez reveals his true, inhuman form. His fingernails become long, sharp talons, a pair of segmented limbs burst from his back, and his torso is split by a thick, spinal column-like structure edged by tiny, moving legs, greatly increasing his already impressive height. Even severing him below the waist will not kill him in this form, but in fact will increase his mobility; he uses the limbs on his back to grab onto wooden beams. Leon eventually kills Mendez and escapes from the barn, reuniting with Ashley and heading onward to find their way back to civilization. 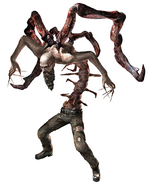 Mendez Mutated
Add a photo to this gallery
Retrieved from "https://capcom.fandom.com/wiki/Bitores_Mendez?oldid=110505"
Community content is available under CC-BY-SA unless otherwise noted.