Bionic Commando, known as Top Secret (トップシークレット) in Japan, is a series of action platform games that consists (as of 2017) of five games and two remakes spanning three decades, beginning with an arcade game produced and released by Capcom in 1987. It was later released for several home computers (ported by Software Creations and published by Go!).

More widely regarded is the second title, released for the Nintendo Entertainment System. Two remakes of this game have appeared: the first one was released in 1992 for the Game Boy; the second remake, titled Bionic Commando Rearmed, was released in 2008 for the Playstation Network and Xbox Live Arcade.

The localized titles of four games in the series are identical. In order to distinguish between them, the original title (if different) was added in brackets.

The playable characters are:

All protagonists in the series are soldiers equipped with a bionic arm featuring a grappling gun, allowing the protagonist to pull himself forward or swing from the ceiling. The series is notable for being one of few instances of a platform game in which the player cannot jump. To cross gaps or climb ledges, the hero must use his bionic arm.

Although Super Joe is only playable in the first installment and in multiplayer mode in Bionic Commando Rearmed, he is featured in all games in the series. 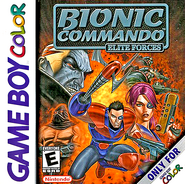 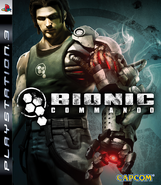