Bionic Commando was originally released in Japan as Hitler no Fukkatsu: Top Secret (ヒットラーの復活 トップシークレット, "Hitler's Resurrection: Top Secret"). It is a platform game released in 1988 for the Nintendo Entertainment System.

Directed by Tokuro Fujiwara, it was later released for the Game Boy (ported by Software Creations and published by Go!). It is the second game in the Bionic Commando series. It is also included in Capcom Classics Mini Mix for the Game Boy Advance.

Rad Spencer traverses through several levels from, in order to rescue Super Joe and stop the plans of Generalissimo Killt. Rad is equipped with a bionic arm featuring a grappling gun, allowing him to pull himself forward or swing from the ceiling.

At the time, the game was notable for being one of the few instances of a platform game in which the player cannot jump. To cross gaps or climb ledges, the hero must use his bionic arm. The levels themselves are, like any conventional platformer, straightforward, with many situations in which there are enemies, cliffs, pits and other dangers lying in wait, that must be overcome.

Most level a communication room and a closed door. Rad should communicate with the base in order to open the door and clear the stage.

The games incorporates overhead segments similar to the Commando game, where Super Joe was the protagonist.

Although this game is generally simply considered just an enhanced port of the arcade version, the two have almost nothing in common, except for the localized title (the original titles are different).

In the original Japanese version of Bionic Commando, the boss of the game is Adolf Hitler instead of Master-D. Hitler could be seen in the background of the original Japanese box art. However, even the Japanese art was altered to remove Hitler (as seen in the image to the right). Due to censorship issues, all references of Nazism were removed in the Western versions. In Bionic Commando Rearmed, he is referred to as "The Leader".

NOTE: The original arcade game music was composed by Harumi Fujita (uncredited). Two themes from that version were re-used and re-arranged for the NES version by Junko Tamiya, who also composed several new pieces for the home version. The Game Boy version lacks a credit list, but one credit is known: freelancer Kouji Murata (then employed by Minakuchi Engineering), who handled all of the game's sound aspects (as stated on his official worklist). 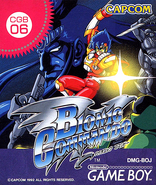