Billy Coen is a character in the Resident Evil series of survival horror games. He is first introduced into the series during the events of Resident Evil Zero.

A convicted ex-Marine, Coen is sentenced to death for allegedly murdering twenty-three people, but manages to escape from a military transport vehicle en route to his execution. He seeks refuge in the Ecliptic Express, a stranded train, where he meets Rebecca Chambers. Despite their radically different backgrounds, the two form an alliance in order to survive. The two use their talents to pass through many of the game’s obstacles, and discover the Umbrella Corporation’s secrets.

Both characters are monitored by James Marcus, who sends various creatures to subdue them. Throughout Resident Evil 0, Coen never explicitly states what he did to merit his court martial, though the game has two flashbacks that show memories from his past. Nevertheless, he proves his loyalty by saving Chambers several times during the game. Coen and Chambers eventually meet Marcus towards the latter portion of the game. After revealing the details of his mortal demise, Marcus mutates into a Queen Leech.

In the final battle sequence, Coen and Chambers subdue the queen leech by exploiting its vulnerability to sunlight. In wake of the incident, Chambers allows Coen to escape, by telling her authorities that he subsequently perished in the Arklay Mountains after their encounter. The two bid farewell, and go their separate ways. Later files in the Nintendo 64 version of Resident Evil 2 make references to Coen, though the game was released before Resident Evil Zero.

Coen reprised his role in Resident Evil: The Umbrella Chronicles for the Wii.

Billy has an alternate costume in the HD Remaster version of Resident Evil Zero that is based on Thomas Clarke from Mercs. 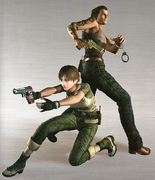 With Rebecca in Resident Evil Zero 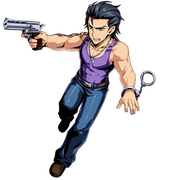