Bianky is a enemy in the Viewtiful Joe action beat 'em up series. It is the most common enemy encountered in the games.

Biankies are mechanical foot-soldiers of Jadow. They wear a black and white striped suit that acts as a skin, which will explode off if hit hard enough. The next attack will usually destroy them utterly.

In the anime series, the Biankies, who are supposed to be guarding the imprisoned Silvia and not giving her the time of day, instead fall madly in love with her, even sometimes helping her in attempts to escape. 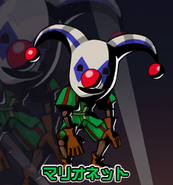 Clowny
Add a photo to this gallery
Retrieved from "https://capcom.fandom.com/wiki/Bianky?oldid=137599"
Community content is available under CC-BY-SA unless otherwise noted.