Ben Bertolucci is a character from the Resident Evil series of survival horror games.

Ben was a reporter in Raccoon City prior to its destruction. He was quite interested in the less laudable dealings of the RPD management. Due to information of the Outbreak, including Umbrella's involvement (likely due to Umbrella helicopters dropping off more creatures), Chief Brian Irons had him locked up.

In Resident Evil 2, Ben refuses to leave the safety of his jail cell, refusing to come out, but offers crucial information. He is later killed when the G-Embryo implanted in his body from his recent encounter with the G-Infected William Birkin breaks from his body to get out. Apparently, the G-Creatures only kill the host if they don't share the G-father's (Birkin) DNA.

In Resident Evil Outbreak: File 2, Ben is found by the player in the underground holding cells. In exchange for a memo detailing the corruption of the police chief, he will give the player a vital key item. Later, the player has the option of returning to Ben's cell to trade microfilms for helpful items.

The player will hear an agonized scream and come across Ben's corpse in his jail cell, but Ben's only appearance alive in Resident Evil: The Darkside Chronicles is through a cinematic flashback. 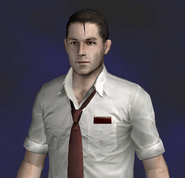 Resident Evil: The Darkside Chronicles
Add a photo to this gallery
Retrieved from "https://capcom.fandom.com/wiki/Ben_Bertolucci?oldid=132550"
Community content is available under CC-BY-SA unless otherwise noted.