Belger (ベルガー, Berugā?) is a character from the Final Fight series where he is the original leader of the Mad Gear Gang and main antagonist of the original Final Fight game. He is a ruthless crime lord who has made millions - if not billions - from his organized crime and control of Metro City.

Belger is a middle-aged (or older) man with broad shoulders, bald head and an Amish-style beard. In his profile artwork from the Street Fighter V website, Belger has a mustache. He is usually seen wearing a dinner shirt with diamond cufflinks, a bow tie, dark pants and dress shoes. His weapon of choice is a bowgun made of ornamented wood.

Belger sits on a luxurious, modded motorized wheelchair to display his power, not due to him being a "disabled" person, being perfectly capable of moving at exceptional speed without it.[1] It has been theorized that Belger uses the wheelchair to trick his enemies into thinking that he is frail and helpless, or to discourage them from attacking him, as it would look uncivilized or cowardly to physically assault a "disabled" person.

Belger has the Mad Gears kidnap Jessica in order to extort political favors from the mayor of Metro City, Mike Haggar. However, Haggar refuses to capitulate, and instead recruits Jessica's boyfriend Cody and Cody's friend Guy to run the Mad Gears out of town and save Jessica. The trio eventually discovers that Belger is the leader of the Mad Gears and a fight ensues, ending with Belger being killed by Cody by being thrown out of a penthouse window.

Belger appears in the episode titled "Final Fight", where he has Rolento kidnap Jessica, the daughter of Mike Haggar, the new mayor of Metro City. Belger uses Jessica as a hostage to prevent Haggar from having the police arrest members of the Mad Gear so they can rob a diamond store. When he meets Ryu and Ken, who are disguised as new members of the gang, Belger is quite impressed with them. Cody and Guy barge into his office and fight Belger, blowing Ryu and Ken's cover. This incarnation of Belger sits on a futuristic hovering chair/throne equipped with twin laser blasters, among other minor weapons. As in the original game Belger falls out the window but survives, as he is seen hanging on a flag pole begging for his life.

A zombie version of Belger appeared in Final Fight Revenge. He is the final opponent in the game, and is not a playable character. He is nothing more than a typical zombie in this state, lacking any of his original personality. The zombie is destroyed for good by Guy, Cody, and Haggar, but manages to survive long enough to infect Guy through a bite. Guy retreats afterwards to meditate and purge himself of "the evil taint". Given that Guy appears in later games in the SF timeline (notably Final Fight 3 and Street Fighter Alpha 3), he obviously overcomes this.

Zombie Belger's gameplay revolves around him being able to stretch his limbs similar to Dhalsim, giving him a great deal of attack range. He also has the ability to throw exploding organs, or completely explode in a rain of body parts for his hyper attack (only to raise himself from the ground a moment later). His other attacks include vomiting acid or biting the opponent.

An interesting twist to the fight with him was that as he took damage, his body parts would fall off and then be usable as weapons (his head behaved like a bowling ball). Beating the game without continuing rewards players with Zombie Belger dancing akin to the zombies in Michael Jackson's Thriller music video.

In Mighty Final Fight, a humorous take on the series, Belger appears as a half-man, half-machine cyborg. In this game, Jessica is stated to be a beacon of light for the city, and Belger's reasons for kidnapping her lie in the fact that he's fallen in love with her (something he reacts to with surprise). Save for the lack of tie and the addition of cyborg components, he resembles a super-deformed version of his regular self, though no longer bothering with his wheelchair. No reason is ever given as to why he is a cyborg at all, though it isn't treated as a surprising fact either. Unlike his original counterpart Belger's involvement with Mad Gear is treated as a known fact. 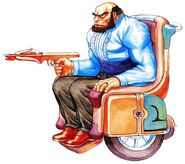 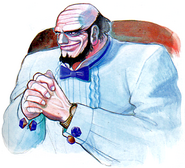 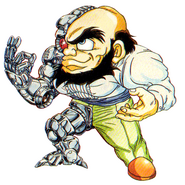