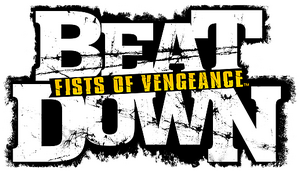 Beat Down: Fists of Vengeance is a 3D action RPG and beat 'em up game developed by Cavia and pubished by Capcom in 2005 for the PlayStation 2 and Xbox.

There are numerous moves that the player can use to beat their enemies including hand-to-hand combat, melee weapon combat and in the later stages of the game firearms such as pistols and shotguns. Powerful combination moves (referred to in-game as "combos") can be learned from a variety of NPCs in exchange for cash or upon reaching a certain skill level. During the course of the game, players can buy clothes or undergo plastic surgery to disguise themselves and evade the rival gangsters and police who pursue them. There is also a rating system based on three attributes: Cash Flow (including items), Leadership (gang size and respect) and Charisma (negotiating skill). These can all be altered by player's choices and have an effect on the ending received.

Aside from the fighting aspect of the game, there is also Negotiation system that can be accessed with most NPCs during a fight or casual conversation. For recruitable NPCs, there are five main negotiation options that are available to the player, and have varying outcomes depending on the specific circumstances they are used in. If in a fight, the enemy must be worn down sufficiently before negotiation can be successful. This is aided by using weapons, taunts and when the foe is low on health.

Interrogate: This option consists of the player asking for information, and it can be used to find out about sales at local stores, job opportunities, and gameplay tips along with story-specific information, depending on the NPC targeted.

There are three game modes.

Violence and crime run rampant on the dark streets of Las Sombras. The Zanetti family is the most powerful crime organization within the city limits, and they have five of the deadliest people around taking care of their dirty work. Then one day, they get an order from the head of the Zanetti family himself to shut down a rival group's drug deal that's supposed to go down. And so they move in to carry out their assault.

However when they arrive, what they find waiting for them is actually a room strewn with the bloody corpses of rival gang drug dealers. And as they stand there, puzzled by the sight before them, the Zanetti family moves in to finish them off. They realize that they were set up to look like they were the ones that committed the murders, and now are running from the same crime family that sent them there. With the police also on their trail, they see that there is no other option but to split up and lay low.

The Xbox version received "mixed" reviews, while the PlayStation 2 version received "generally unfavorable reviews", according to the review aggregation website Metacritic.[1][2] In Japan, however, Famitsu gave the game a score of 30 out of 40.[3][4] 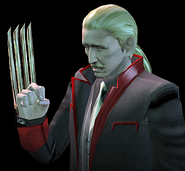 Chester
Add a photo to this gallery

Retrieved from "https://capcom.fandom.com/wiki/Beat_Down:_Fists_of_Vengeance?oldid=137504"
Community content is available under CC-BY-SA unless otherwise noted.