Beat (ビート, Bīto?) is a character from the classic Mega Man series of action platformer games.

Introduced in Mega Man 5, Beat is a useful robotic bird, built by Dr. Cossack for Mega Man, as a gift for saving his daughter Kalinka. Beat doesn't like carrying weighty objects, but he carries Mega Man anyway. In Mega Man 5, Mega Man 6 and Mega Man IV, he attacks enemies that appear in his path (except bosses in Mega Man 6).

In Mega Man 7, he can save Mega Man from pits, while in Mega Man 8 he helps out in the sections where Mega Man normally uses the Rush Jet.

In Mega Man & Bass, he creates a shield to protect Mega Man, and he also protects Proto Man and Duo in the arcade games Mega Man: The Power Battle and its sequel Mega Man 2: The Power Fighters.

He appears in the 2001 China-only release Mega Man Strategy.

Beat's counterpart in the Mega Man Battle Network series is a Navi Customizer program that appears once per battle in multiplayer NetBattles to take one of the opponent's Mega/Giga chips for the player to use. 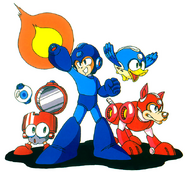 With Eddie, Mega Man and Rush

Beat.EXE
Add a photo to this gallery
Retrieved from "https://capcom.fandom.com/wiki/Beat?oldid=132243"
Community content is available under CC-BY-SA unless otherwise noted.