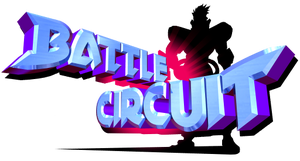 Battle Circuit (バトルサーキット, Batoru Saakitto?) is an side-scrolling action beat 'em up game developed and published by Capcom for the CPS-2 arcade hardware for Japan and Europe in 1997. Taking place in an alternate future earth, the game revolves around a group of bounty hunters who must capture the mad scientist Dr. Saturn and secure a sophisticated computer disc carrying a program known as the "Shiva System". The game contains comic-like characters in a futuristic science fiction setting and is considered by some to be a cult classic. Battle Circuit was Capcom's last beat 'em up game developed for the arcades, and while it was not their final beat 'em up overall, it was the last one developed internally by the company. The game would later make its home console debut in Capcom Beat ’Em Up Bundle released on September 2018.[1]

Battle Circuit's arcade cabinet provided support for up to four simultaneous players who can each assume the role of five possible characters. Players must progress through a number of levels made up of horizontally scrolling screens filled with enemy characters that must be defeated using a combination of attacks and movement abilities each character utilizes.

Every character is given a selection of these abilities that can be expanded as game play progress by purchasing special "upgrade discs" after the completion of each level using coins obtained by defeating enemies. These techniques are often a combination of either of the two action buttons and the joystick, and can add additional varieties to a given character's arsenal. A player must attack enemies until their health (indicated by a bar under the player's when the enemy is attacked) is reduced to 0 and they are thus knocked out. If a player's health bar is depleted, they will also become knocked out and must use up one life to continue. If all of a player's lives are depleted in this fashion, the game will end unless more credits are purchased.

Special techniques called "Battle Downloads" can be used by pressing both action buttons while jumping, which results in the player and his allies (if any are present) gaining a certain attribute, the effect of which is unique to each character. Cyber Blue, for example, can use his Battle Download "Power Up" to increase the amount of damage dealt by attacks, while Yellow Iris' "Speed Up" increases attack speed. A character will start with a stock of two of these techniques to use per life, and can obtain more from capsules scattered throughout the levels, up to a maximum of five.

Various items can be found inside destructible objects such as barrels and crates, and can provide the player with additional health or add points to their total score. Once a player's score reaches a set amount, they are rewarded with an extra life that will give them another chance to continue from where they were knocked out by an enemy.

Taking place in the future year 20XX, Battle Circuit follows the exploits of a group of super-powered bounty hunters as they apprehend wanted criminals (identified by special serial numbers) in the city of Neo Koba. The game begins with the player attempting to apprehend criminal 9696X, a scientist named Doctor Saturn and his blob-like sidekick aboard a spaceship orbiting Earth. After the battle, the character selected by the player returns to his employer Harry, and is promptly given another assignment to capture the leader of the "Delete Gang", Johnny, who holds a valuable floppy disc in his possession. The bounty hunter then confronts Johnny at his disco hideout, and learns that the disc contains a malicious computer program known as the "Shiva System". This program, it is learned, is capable of controlling all the computerized systems in the world. Players must then travel through various levels and fight through various members of the Delete Gang to obtain the disc and claim their bounty.[2]

Battle Circuit contains five characters for the player to choose from, each with their own unique attacks and Battle Download ability. Though each of the character's real names are mentioned in their individual character profiles during the opening demo, they are mostly referred to by their codenames, each indicating a physical attribute and corresponding color.

Battle Circuit was developed by producers Noritaka Funamizu and Yoshiki Okamoto of Capcom's arcade production team in early 1997.[3] While structurally very similar to the company's early scrolling action games like Final Fight and Alien vs. Predator, Battle Circuit is set apart stylistically by employing a manga-style sci-fi approach to story and character artwork. The art staff, overseen by Ohnishi Hiroki and Yamamoto Kouji,[3] created an assortment of characters with features reminiscent of older Capcom characters and superfluous comic book elements.

The game saw a speedy translation effort that effectively made the title available in both Japan and parts of Europe on the same day. Though there are no game play differences between the Japanese and language versions of the game, a few pieces of Japanese dialogue were omitted from the European release. The game was not released in North American arcades or any other part of the world.[citation needed] Moreover, even at the time of its release in arcades, Capcom stated it had no plans to release the game for home consoles.[citation needed] On September 18, 2018, it was released worldwide on Capcom Beat 'Em Up Bundle digitally for the PlayStation 4, Nintendo Switch, Xbox One and Microsoft Windows.

Battle Circuit's background music was composed by Syun Nishigaki of Capcom Arcade Sound Team, and has a recurring pop and electronic theme present throughout the game. The music was recorded using only synth-based computer generated sound, a common recording medium for arcade games on the CPS-2. An official soundtrack entitled Battle Circuit Original Soundtrack (catalog number VICL-60056) was released commercially in Japan by Victor Entertainment on July 2, 1997 and retailed for ¥2,205.[4]

Battle Circuit's background music was composed by Syun Nishigaki of Capcom Arcade Sound Team, and has a recurring pop and electronic theme present throughout the game. The music was recorded using only synth-based computer generated sound, a common recording medium for arcade games on the CPS-2. An official soundtrack entitled Battle Circuit Original Soundtrack (catalog number VICL-60056) was released commercially in Japan by Victor Entertainment on July 2, 1997 and retailed for ¥2,205. 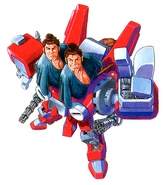 Cyber Samurai
Add a photo to this gallery

Retrieved from "https://capcom.fandom.com/wiki/Battle_Circuit?oldid=142069"
Community content is available under CC-BY-SA unless otherwise noted.