Barry Burton is a character in the Resident Evil survival horror franchise. Barry, along with most of the characters who originally appeared in the first Resident Evil, is a member of S.T.A.R.S. and the "backup man" and weapons expert of Alpha Team. He is described as a veteran of numerous special forces, as well a gun enthusiast who wields a Colt Python .357 Magnum revolver (changed to a .44 Magnum in the GameCube remake) instead of the standard-issue 9mm handgun used by the other members. Following his appearance in the original game, Barry makes a cameo appearance in Resident Evil 3: Nemesis and has a starring role in Resident Evil Gaiden. Barry returns and his older daughter Moira is introduced in Resident Evil: Revelations 2 who had their strained relationship until they reconcile in the end. He was voiced by Barry Gjerde in the original Resident Evil and Ed Smaron in the later GameCube remake. Jamieson Price voices Barry in Resident Evil 5 and Mercenaries 3D and Michael McConnohie in Resident Evil: Revelations 2 who also voices the main antagonist, Seth in the Street Fighter IV series. Barry is infamous for delivering the line: "You were almost a Jill Sandwich" in the original Resident Evil. He also refers to Jill as "the master of unlocking" in the same game. He later reused his famous lines and jokes in Revelations 2.

Barry is the long-time friend of fellow S.T.A.R.S. member Chris Redfield. This former SWAT team member is in charge of the weapons and supplies for the S.T.A.R.S. Team. With more than 16 years of valuable field experience, Barry has seen just about everything and is a useful ally in any situation.

In the original Resident Evil, Barry serves as the partner of Jill Valentine and does not appear in the Chris Redfield scenario beyond the game's introduction. Barry aids Jill during the course of the game, often saving her from some of the more dangerous predicaments in the game, as well as providing her with additional ammunition and items.

As the game progresses, Barry's actions in the story will start to become suspicious. At one point, the player must decide whether Barry is worthy of Jill's trust. This is done in the original game by choosing whether to wait for Barry to retrieve a rope when Jill falls into a secret passage, and later when Barry asks the player whether or not to accompany him in the courtyard's underground tunnels. Choosing not to wait for Barry or not follow or accompany him in the underground passage will result in the player finding a dying Barry at some later point of the game, who gives Jill a photograph of his family before passing away. On the other hand, the player can choose to survive the game with Barry. It is then revealed that Barry was being threatened by the real traitor, Albert Wesker, into following his orders.

Resident Evil 2 reveals that Barry did indeed survive the events of the first game along with Jill, Chris and Rebecca Chambers.

Resident Evil 3: Nemesis elaborates on Barry's fate following the first game, by revealing in Jill's diary (as well as in one of the game's epilogues) that Barry sent his family into hiding somewhere in Canada. Barry also makes an uncredited cameo in an ending: if Jill loses her intended escape chopper to Nicholai Ginovaef before the final battle, Barry will come to retrieve Jill and Carlos Oliveira in the game's ending moments before the destruction of Raccoon City.

In Resident Evil Code: Veronica, it is alluded that Barry joined an anti-Umbrella movement following the events of Resident Evil 3.

Resident Evil Gaiden attempts to expand on this idea by having Barry as its main character. In Gaiden, Barry is sent to the Umbrella-owned ship, the "Starlight Cruiser", when another member of the same group (Leon S. Kennedy from Resident Evil 2) goes missing during a mission. He eventually finds Leon, and the two team up with a young orphan named Lucia to fight one of Umbrella's newest Bio Organic Weapons.

The original Resident Evil was remade for the Nintendo GameCube in 2002. Barry's role in the game remains relatively unchanged, but his actions are made even more traitorous. At one point in the game, he actually pulls a gun on Jill before Wesker reveals himself to be the traitor. He is also easier to be killed in the remake, as all the player has to do is refuse to give him back his gun during the fight with Lisa Trevor.

In Resident Evil: Revelations 2, after breaking a gate with a crane mechanism, he says "Ha! Who's the master of unlocking now, huh?", which is a reference to his infamous Resident Evil quote about Jill's skill with lockpicks. 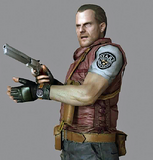 Resident Evil: Revelations 2 BSAA uniform
Add a photo to this gallery
Retrieved from "https://capcom.fandom.com/wiki/Barry_Burton?oldid=122047"
Community content is available under CC-BY-SA unless otherwise noted.