A group of powerful, one-armed enemies, the Bandersnatches were developed as a more affordable version of the Tyrant-class B.O.W. Nevertheless, due to the flawed processes used in their creation and in the cut costs, parts of their anatomy tended to atrophy away within moments of their creation; the atrophied parts were often their left arms. To compensate for this damage, the T-Virus responded by allowing much greater control of their right arms. The remaining appendages were increased in mass and size to become as thick and resilient as their torsos, introducing the ability to stretch beyond normal limits, almost to five metres. Thanks to this, their preferred method of attack is to strike from afar, pinning their victims against a wall and crushing their skulls. 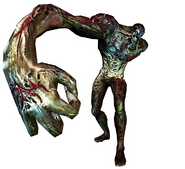 Resident Evil: The Darkside Chronicles
Add a photo to this gallery
Retrieved from "https://capcom.fandom.com/wiki/Bandersnatch?oldid=132549"
Community content is available under CC-BY-SA unless otherwise noted.