Bael and Dagon are characters from the Devil May Cry series of action games. They appeared in Devil May Cry 4 as two of the bosses.

Bael and Dagon's species has toad-like bodies, and they possess two angler fish-like glowing feelers known as Rusalka which resemble young, nubile women, and can speak. These are used to entice human prey, but they can also defend themselves and freeze the prey. They have a highly vulnerable tongue, and though they are capable of shrouding their bodies in a special gas that turns them invisible, however, their potent body odor gives them away. The Bael variant is colored white and has blue Rusalka, while the Dagon variant is colored green and has red Rusalka.

Some time before the start of the game, a Bael emerges from the Fortuna Castle Hell Gate in the Central Courtyard, and its influence shrouds the castle in a blizzard. Nero first encounters its Rusalkas and recognizes them as demons, and after fighting them for a short while, the Bael appears. Nero manages to defeat the Bael and rip off one of its Rusalka's, which his Devil Bringer absorbs. The dying Bael threatens that his brothers will come, and Nero soon sees six Dagons about to emerge from the gate. However, he is able to rush to the gate and deactivate it in time.

Later, a Dagon emerges from the gate, and freezes much of the castle in ice. Dante also encounters its Rusalka's in the Central Courtyard, where he flirts with them, but he too notices the actual demon, insulting it by crediting this to its stink. He fights and defeats the demon, slicing it in two as it turns to ice and shatters. He then takes the Pandora which was powering the Hell Gate, and uses it to slaughter the escaped Dagons and destroy the gate. 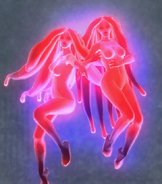 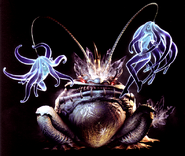 Bael character art.
Add a photo to this gallery
Retrieved from "https://capcom.fandom.com/wiki/Bael_and_Dagon?oldid=130794"
Community content is available under CC-BY-SA unless otherwise noted.