Bad Box Art Mega Man, known as U.S. Mega Man in Japan, is a joke character from the Mega Man franchise of science fiction action games. Bad Box Art Mega Man is the name given to the rendition of the original Mega Man on the North American box art from the 1987 game. This rendition had become so infamously terrible that it became an internet joke, and from this sprang the idea of actually basing a "character" off of it. This character even began to make appearances in games, starting with Street Fighter X Tekken.

Bad Box Art Mega Man appears to be an overweight and middle-aged, albeit surprisingly athletic human, wearing an ill-fitting jumpsuit and helmet with a blue and yellow color scheme, unlike the basic blue and cyan armor of the standard Mega Man. He also carries a handheld pistol-like gun instead of having the Mega Buster. 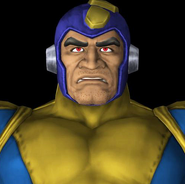