Baby Head, known as Hoover (フーバー, Fūbā?) in Japan, is a character from the futuristic beat 'em up game Captain Commando. A member of the Commando Team, Baby Head is a super genius baby who fights using a robot of his own design that is both strong and quick.

His Special Move is his "Knee Rocket" (ニークラッシュ・ミサイル, "Knee Crush Missile" in Japan), a sure-killing technique that launches a missile from the robot's knee. Missiles are constantly manufactured within the robot. His dash attacks are "Rolling Punch" (ローリングパンチ) and "Elbow Smash" (エルボードロップ, "Elbow Drop" in Japan). Rolling Punch is a strong punch that spins like a drill. Elbow Smash crushes the enemy under an elbow blow coming off a jump. He can grab his enemies and do either a knee kick, a "Pile-Driver" (パイルドライバー) or a "Fling-Away."

Other features he uses are the "Talking Machine", the "Stable Cradle" ("Hoover Cradle" in Japan), the "Silverfist Vehicle", the "Missile Launcher" and the "Jet Hover." His Talking Machine resembles a baby pacifier. It allows him to speak over 3 million languages in the cosmos. The Stable Cradle keeps the robot from rocking, no matter how far it's tilted. The Silverfist Vehicle has 12,000 horsepower, 582 kilograms (1280.4 pounds) of bodyweight, and it mounts fuzzy-logic control. Baby Head's friends call it "Baby Carriage." The Missile Launcher is a missile production facility built inside the leg, as well as in the Silverfist Vehicle. The Jet Hover is used for high-speed position shifting.

In Marvel vs. Capcom, Marvel vs. Capcom 2 and Namco x Capcom, the four members of Commando Team combined can use the attacks "Captain Storm" and "Captain Sword". When called by Captain Commando in one of his attacks from the Marvel vs. Capcom games, Baby Head uses the "Baby Head Missile" (フーバーミサイル, "Hoover Missile"), launching himself with a missile from the robot's torso, falling back in the robot after hitting the enemy.

Baby Head appeared as a playable character in Namco x Capcom, teamed up with Mack The Knife.

He also appears in PTX-40A's ending in Tatsunoko vs. Capcom.

He was one of the playable characters in Capcom Super League Online. 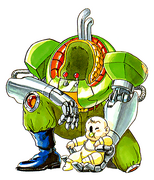 Baby Head in his original form.