Astaroth (大魔王 アスタロト, "Great Demon Lord Astaroth") is a character from the Ghosts 'n Goblins games. He is one of the series' main villains and arguably the most well known one.

He almost always appears as a large ferocious beast with horns. A demonic face is located in the middle of his torso, which contains within it the means of his defeat.

In his original appearances in both Ghosts 'n Goblins and Ghouls 'n Ghosts, he is depicted as a large demon with blue fur around his head and brown fur on the rest of his body with a long red cloak draped over his shoulders, while on his lower torso, he is always seen with a second demonic face with red eyes and large fangs. He also wears white boots with spikes around their rims.

When possessed by Nebiroth, his entire body turns teal, save for his head which gains a large white beard, his cloak turns blue and his boots gold, while a golden crown adorns his head along with gold spiked shoulder guards.

As "Dark Astaroth" in Ultimate Ghosts 'n Goblins, he retains his classic design which has been updated and appears more demonic. His cloak now has black lines inscribed over it, with armored and spiked shoulder guards, his boots are now gold and encrusted with red and blue gems, with the biggest change to Astaroth being a pair of large black wings jutting from his back.

Astaroth is the evil and merciless ruler of Makai in his master Lucifer's stead. Extremely resistant to pain, he can shoot fireballs from both of his mouths.

Having lost the throne of the Makai after his first defeat, he now watches and protects Lucifer's keep. Instead of fireballs, this time he will attack the player with his long-ranged fiery breath from both of his mouths. The player must face him two times in a row, and the second time he divides himself and corners Arthur if one of his forms is not defeated quickly enough.

In this game, he protects Sardius and shoots laser beams and a trail of fireballs from his two mouths. He also likes to stomp on Arthur if given the chance. He will battle Arthur two times. When he is finally slain the first time, his body is possessed by an entity known as Nebiroth, the undead devil king, and he is resurrected.

In this entry, he is called Dark Astaroth and has large black wings.

Astaroth is the fourth boss from Adventure Quiz: Capcom World.

In Namco × Capcom, Astaroth was defeated by Arthur several years before the events of the game, but he revived and makes an alliance with the demon Druaga (although they were actually using each other) to take over the Demon World. At first, Astaroth seems a bit off from his former self, but when defeated by Arthur and his allies in the Demon Realm Village, Nebiroth appears and reveals that Astaroth is simply a marionette under his control, as Astaroth's soul was chopped in half when he was first defeated by Arthur, allowing Nebiroth to have two Astaroths (each with half of the soul) appear to work for him. The two and Nebiroth are defeated, and without them the Demon Village collapses. Astaroth and Nebiroth are revived near the end of the game, and are killed again.

Astaroth also appears in Project × Zone as a Rival Unit. His special attack is Devil Rage (魔王の怒り, Maō no Ikari?, "Demon King's Wrath"), where he punches the target upwards, releases a beam from his upper mouth, and unleashes flames from the lower mouth.

Astaroth appeared in events from the mobile games Otoranger and Zombie Cafe.

In SNK vs. Capcom: SVC Chaos, Astraroth appears as a cameo in Demitri Maximoff's ending after his battle against Red Arremer.

Astaroth appeared in volume five of the Hisshō Technique Kan Peki-ban book series and he made also a cameo appearance in the 1988 manga Warera Hobby's Famicom Seminar.

Astaroth appears in the Archie Comics crossover Worlds Unite. Arthur and Astaroth, alongside the latter's right hand Firebrand, prepare to duel, only to be interrupted by the opening of a Genesis Portal, with Shadow Hunters Zain and Geemel emerging with the Unity Engine. Arthur, mistaking them for knights, requests their assistance in stopping Astaroth, only for Zain to blast his armor off. Bunnie Rabbot and Zero then emerge and fight them. Astaroth then expresses annoyance and confusion at the events, with Bunnie Rabbot explaining that Sigma is about to steal their world's energy via those robots. After the two Mavericks are pulverized, the dark lord proceeds to call a truce to deal with Sigma, and sends Firebrand to ally with Arthur. 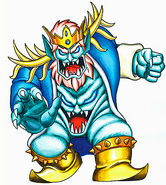 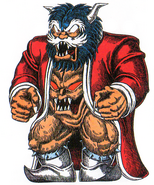 UMvC3 Heroes & Heralds card.
Add a photo to this gallery
Retrieved from "https://capcom.fandom.com/wiki/Astaroth?oldid=141820"
Community content is available under CC-BY-SA unless otherwise noted.