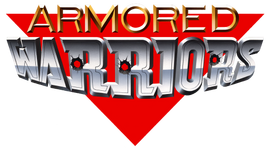 Armored Warriors, known as Powered Gear - Strategic Variant Armor Equipment (パワードギア?) in Japan, is an arcade beat 'em up game released in 1994. It used the CPS-2 arcade system, and featured a free-form fighting system that incorporated up to three players at once.

It had low distribution in Japan and North America, but it spawned a more popular spin-off fighting game, Cyberbots: Fullmetal Madness which used the "Variant Armors" mecha gameplay feature, and a spiritual successor Tech Romancer, also a fighting game. After making its home console debut with the Retro-Bit Super Retro-Cade dedicated console,[1] the game would later be released digitally as part of the Capcom Beat ’Em Up Bundle on September 2018 for the PlayStation 4, Nintendo Switch, Xbox One and Microsoft Windows.[2]

Character designs were handled by Kinu Nishimura, while SENSEI did the designs of the mecha.

The most prominent feature in Armored Warriors is its multi-player option, and the ability to augment the players' mechs with a large array of different parts for varied attacks. Multiple regions of the mech can be switched, including the arms, legs and handheld weaponry. Such parts are gained (or lost) by inflicting damage upon enemies, causing various parts to come off and be wielded by the player. Additionally, by using commands, the players can use an option called a "Team-up Change" which initiates a powerful attack used in tandem, and can also further customization of weapons by using a main and sub-weapon.

Gameplay follows a mission-like structure, with seven in total. Each stage consists of the game giving the player prerequisites such as a time-limit to eliminate enemies, a set amount of ammo for weapons, and destroying a varying amount of enemies. Each level ends with a boss character, and the game provides competent replay value with the customization options.

Variant Armors are based on powered exoskeletons, creating a powerful "MSW" (Man Silhouette Weapon) with high destructive power for occupation and control, making anyone using a V.A. an one man army by dramatically increasing the soldier's individual ability. The walking AEX (Armored Executioner) is a mainstream model, while V-AEX (Variant Armored Executioner) is a state of the art model abbreviated as VA (Variant Armor) due to its variable form, being able of expanding the range of its operations by incorporating different parts.

The ammo from Sub Weapons depends of the player's V.A., FORDY and REPTOS having the lowest and GULDIN the highest.

In the year 2281, the war spanning half a century over territory between the United Earth Government and the Raian Principality had at last come to an end with a cease fire agreement.

But, this peace was not to last. A year after a truce agreement between the two planets, a scouting party reported that the Raian capital of Melkide was captured by an army of unknown origin. The former Raian army captain Azrael, who has converted himself into a cyborg in an attempt to become "the perfect warrior", had marshalled several thousand other cyborgs and declared war against the Raian Principality. Robbing mobile weapons from the army, this group of rogues has invaded the Raian capital of Melkide and has begun to abduct the civilians to convert them into cyborg soldiers.

The United Earth Government, receiving an emergency message from Raia, decided to dispatch an advanced army to Raia to retake the capital and rescue the citizens. However, unknown to the public, the true purpose of this operation was to bring Raia under Earth's control once the mysterious army was eliminated. Among the army is the Red Shield Unit (ブラッディーアーマー?, Bloody Armor in Japan), an elite squadron containing four Variable Armor pilots.

And so, in October 2282, the United World Forces begin to launch its attack upon the planet Raia, starting the most intense battle in human history.

On July 25, 2283, the war on Raia ended with the total victory of the United Earth forces. All hostages taken by the enemy were rescued and peace was restored to Raia. But the war had taken its toll, Raia's cities were in ruins, her resources were exhausted. Because of their weakened condition, Raia allowed the United Earth Force to establish a permanent station on the planet. But the military balance between the two nations was lost, and soon the United Earth Force became the real power on Raia. Eventually the Principality of Raia virtually disappeared.

Additionally, this game credits its staff in its default Score Ranking Table, which is as follows:

Group art of the protagonists taking a break.