Capcom Database
Register
Don't have an account?
Sign In
Advertisement
in: Articles with insufficient citation, Characters, Devil May Cry Characters,
and 7 more

Arkham is a character from the Devil May Cry series. He is one of the two main antagonists in Devil May Cry 3, the other one being Vergil. He is the father of Lady and a scholar with supernatural abilities and vast knowledge about the demon world's folklore.

Arkham wears black clothes and he is bald to the extent of having no eyebrows. He has a scar covering the left side of his face which is the result of a botched ritual to turn himself into a demon, in which he sacrificed his wife. Like his daughter, Lady, he has heterochromia. In most of Arkham's scenes, he is holding a book in his hands.

Arkham is a master manipulator, pitting Dante, Vergil and Lady against each other by preying on their personalities and desires. To Vergil, he plays the role of a sycophant, pretending to help Vergil while plotting against him. He taunts and further enrages Lady, who is driven by her need for revenge on him, and later convinces her that his evil acts were Vergil's fault. To Dante he appears in the form of an apparent resident of the tower named "Jester", mocking Dante as he alternately advises and challenges him. His plans are successful, and he is able to open the gate to the demon world.

He is the first to retrieve the Force Edge, and with its power combined with the restored halves of Eva's amulet, he acquires a large portion of Sparda's power and takes on Sparda's demonic form. The power overwhelms him however, and he further transforms into a shapeless form when he battles Dante. He is defeated when Vergil teams up with Dante and they cast him out of the demon world, but it is Lady who ultimately kills him.

In the Special Edition release of the game, Arkham appears in his Jester form as an additional boss character for the player to fight. 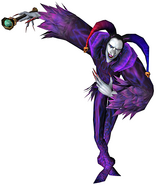