Anakaris is a character from the Darkstalkers series of fighting games. He is a giant mummy, and was the twelfth pharaoh of a vast empire in Egypt.

Foreseeing his death and revival, Anakaris created a pyramid and a place for his revival. 5000 years later, he was revived when Pyron came along. In order to rule his kingdom once more, he gathered immense power from battling others and then travelled back 5000 years in time. When his kingdom came to be threatened again, he assumed the form of a mummy again to engage in the battles there. He eventually decided to protect his kingdom by moving it entirely into another dimension.

After battling with other Darkstalkers for a brief time, he travels 5000 years back in time to defend his kingdom once more. After fighting off the invaders of his kingdom, he then retaliates and conquers them. But once his kingdom is saved, he hears a voice from the far future. He travels to the present time and enters the Majigen. During the battles within Majigen, he learns that the destruction of his kingdom and people is unavoidable. In response to this revelation, he returns to the past and transports his kingdom beneath the Earth into a new dimension so that it may be free of the wars of Earth.

The History of His Kingdom

These are the words Anakaris spoke when he became the pharaoh. It can be seen that he had already possessed overwhelming charisma and leadership.

"Ultimate and immortal. The only and absolute. I am the true king of this golden kingdom which shines brilliantly. Anakaris the first. Those of you who kneel to me are granted the right to be protected equally under the name of god. But, if you refuse my protection and oppose me, you will be judged under god's name and will be burned with the flames of hell.

Those who respect heaven will be given eternal happiness. Those who look down on heaven must pay the price of one's foolishness with one's own life I promise my eternal rule and I allow only souls worthy to gather to my knee's."

Anakaris is the slowest character in Darkstalkers in terms of mobility (from his walk to his jump). While this would seem to be a great disadvantage, many skilled Anakaris players have been able to find benefits for his slowness. His jump, for example, is more or less an aerial float that lasts a little over three seconds before landing. In between the launch and the land, Anakaris can either float backwards or stay suspended in the air for a fixed time. While suspended and floating, Anakaris can move horizontally on either directions and can even ascend if needed. This tactic makes Anakaris a superior challenge in the air.

To counter balance Anakaris' slow walk and dash, he possesses a unique backwards dash when performed at the corner of a screen. Upon dashing backwards, he vanishes from one end of the corner and reappears to the opposite end. This makes for a quick getaway, if his opponent plans on trapping him in the corner.

Anakaris has many mystical abilities. He is capable of hovering in the air, has the ability to teleport, and his limbs can stretch great lengths in a manner similar to Dhalsim. His limbs can become intangible as they can be seen passing through solid ground easily. He is also capable of splitting his body in half and his companion spirit or "khaibit" will temporarily take control of his lower half. He can also form his lower half into a gold pyramid and perform aerial dives on his foes in this state. When he guards against attacks, his body becomes a hard golden sarcophagus and he can even mimic this state during one of his kick attacks.

He is able to summon large sarcophagi to drop down on his opponents from above. He can entrap his foes inside one of these sarcophagi as well. In addition, he can combine his arms when they are stretched out and form his hands into the head of a cobra to bite his foes. His hands can disembody from him and quickly float towards an enemy. If they grab the enemy, Anakaris will then entangle the captive with linen cloth, shake him/her around, and then slam them on to the ground. He can summon ghostly energies from his mouth that can mutate his opponent into a harmless form (During gameplay, they can not attack. They can only jump or walk forward). He can summon a variant of this attack from his hand that has pyrokinetic properies. If he is prone, he can temporarily open his body and a burst of energy will erupt from him. He can also invoke a similar technique while standing and entrap his opponent in it. Some of his fellow undead can also entrap his enemies and allow Anakaris to unleash a barrage of spells on the hapless opponent. He can also absorb his opponents projectile attacks and reflect them back.

Anakaris also made appearances in Marvel vs. Capcom 2: New Age of Heroes and Capcom Fighting Evolution. 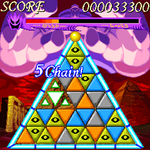