Alia is a major supporting character in the Mega Man X series of action platformer games. She first appeared in Mega Man X5, acting as a navigator for the Maverick Hunters X, Zero and later Axl. She briefs the Hunters about their missions and guides them through the areas, giving information about the objectives, recent developments, and spotted Mavericks. In Mega Man X8, Alia can be unlocked as a secret playable character, like her two Navigator comrades, Layer and Pallette, imitating the style and moves of X, though she is limited by the fact that she cannot use Armor Parts. Before working for the Hunters, Alia was part of a team of Reploid Research scientists and was close to her colleague, Gate.

Alia appears as an adult female Reploid with blond hair and blue eyes. She has the standard Reploid armor design with a coral and white color scheme with the addition of a transceiver headset.

Like all the other reccuring characters in Mega Man X8, Alia experienced a major design change. Her appearance was thinned, removing all her bulkier body armor parts and exchanging them for some more slender ones. Her hair was also let down like in her days as a researcher.

Alia is a very dutiful character. She tries to set her personal feelings and concerns aside (especially during the Nightmare Incident) to carry out her work for the sake of everyone. She cares deeply for the members of her team and does her best to guide them through their missions without them being harmed. Alia rarely shows any weaknesses, but the Nightmare Incident revealed a deeper, more emotional part of her personality, where she blames herself for Gate's reasons for becoming a Maverick and trying to wipe out all low-level Reploids to create a new nation under his ideal. Due to her past emotional confrontations and her scientific nature, Alia is a realist, claiming she does not believe in "miracles".

As a former Researcher, Alia is highly intelligent, possessing both advanced engineering and analytical skills. She is able to compile and construct new Armors when in possession of the necessary data provided by Dr. Light's holograms, and has even managed to reconstruct damaged Armors, although to date none of her reconstructions have ever been 100% complete.

Before joining the Maverick Hunter forces, Alia used to work at a research lab analyzing the potential of Reploid engineering. She also used to have longer hair during that time (which she restored to its original length in Mega Man X8). One of her colleagues was Gate, who was believed that Alia held feelings for. Gate, who was obsessed with the unanalyzable DNA of X and Zero, devoted all his time and power into creating Reploids with DNA that had similar attributes. Eventually, he succeeded and was praised immensely, but unfortunately this also created jealousy and contempt between him and his colleagues. Though she regretted it afterwards, Alia was drawn into the conspiracy of the other researchers sabotaging Gate's creations, either by trapping and destroying them during their missions or having them declared Maverick for dubious reasons. She was directly involved in the destruction of Blizzard Wolfang and Gate's business acquaintance Ground Scaravich; but was forced to do so in both cases much to her chagrin. After Gate left full of hatred and bitterness, she decided to start all over again herself, becoming a member of the Maverick Hunters.

Alia made her debut in Mega Man 5 as X and Zero's navigator. While she played no crucial role in the plot aside from aiding in level navigation, she does talk a bit in the ending where Zero went Maverick and X's memories of him were erased, stating her doubts of X's return as a miracle and believing something to be behind it.

Alia's character was greatly expanded in Mega Man X6. Gate, her former colleague, obtained a piece of Zero's remains and had analyzed it, creating the Nightmare Virus, as well as the Reploid High-Max and the Zero Nightmare, a purple copy of Zero which was blamed by Gate as the source of the Nightmare, and started a made-up campaign against Zero to become a new hero for the people and Reploids. While X (and the later recovered, original Zero) investigated the areas and defeated the Nightmare Investigators, Reploids resurrected by Gate to analyze the Nightmare, Alia revealed to the Hunters that she used to work together with Gate in a Research Team and was part of a conspiracy to sabotage his Reploids, which had now been revived by the Nightmare Virus. Blaming herself for Gate's bitterness, she tried to convince him to surrender and stop his plans of creating a new nation for only top-level Reploids before he ended up himself being killed.

Although she tried her best, Gate didn't listen and fought X and Zero, ending up being defeated by them and damaged beyond repair by a revived Sigma. She was given a choice by X who had dragged Gate's remains out of his destroyed lab whether to try to repair him or not. What exactly Alia decided to do with Gate afterwards remains unknown.

Alia also assisted during the events of Red Alert by adding in stage navigation like before. She did not have a major impact on the plot, but she did show up in all three endings. She contacted Zero in his ending to wake him up, and appeared in X and Axl's endings to discuss the latter's progress.

In the game's plot, Alia did her usual work supporting the Hunters with information about the stage layout, the upcoming bosses and eventually about Reploids which had a DNA core suitable enough for Axl to transform. She also analyzed the New Generation Reploids' source of viral immunity - their Copy Chip - and also revealed that the DNA of the New Generation Reploids resembled that of Sigma. She also located Sigma's base on the moon. Her final appearance in the game, although off-screen, was her call for X and the others after they had taken out Lumine.

Alia can be unlocked as a playable character after completing the game once, using Alia as the player's navigator at least two times more than Layer or Pallette, or by entering a secret code at the title screen for the PlayStation 2 version or the Mega Man X Legacy Collection 2 version and then bought at the store. A sound clip of Alia can be heard when entering the code correctly. Alia's movesets and abilities are modeled after those of X, being able to charge her Buster for more powerful attacks and receiving the same special weapons from defeated Mavericks as X can. However, she is unable to charge up the gained weapons. Also, like with all other characters, her stats and abilities could be upgraded by finding Rare Metals and researching them. Though copying X's style, Alia, like the other two Navigators, received no pre-boss battle dialogue with the Mavericks when selected as part of the team.

Alia in her days working with Gate 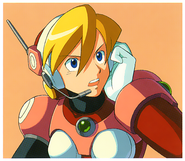 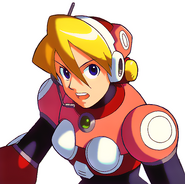 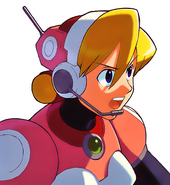 Zero's ending in Tatsunoko vs. Capcom
Community content is available under CC-BY-SA unless otherwise noted.
Advertisement