Butcher by day, "Grater" by night!

Professional wrestling
Alexander the Grater (Sheep the Royal in Japan) is a character from the Slam Masters series of wrestling.

His name is a wordplay on Alexander The Great, and he is modeled after the late professional wrestler Big Van Vader.

His Japanese name, Sheep the Royal, may be a nod to The Sheepherders, the original gimmick of Butch Miller and Luke Williams, known to most American wrestling fans as The Bushwhackers, who are from New Zealand.

Alexander the Grater is a CWA wrestler. In Australia, he was a member of the national rugby team. When he came to America, he participated in the American version of the sport, American football, gaining some fame before his violent behavior got him kicked out. Afterwards, he took up wrestling. His nickname is intended to fool opponents into thinking that he isn't capable of killing them. His unique attack skill is the spike DDT. 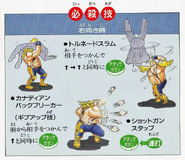 Moves from the Super Famicom manual
Add a photo to this gallery
Retrieved from "https://capcom.fandom.com/wiki/Alexander_The_Grater?oldid=138893"
Community content is available under CC-BY-SA unless otherwise noted.