Not to be confused with fellow Resident Evil character Albert Wesker.

Albert Lester is a character from the Resident Evil series of survival horror games. He appeared in Resident Evil Outbreak: File 2 where he was the administrator of what would eventually be known as the Abandoned Hospital.

He was the husband of Dorothy Lester, and very much devoted to her. After she contracted cancer, she was injected with a last-ditch mutagen based upon the T-Virus. While this successfully fended off the cancer, it caused her to develop the disease. Albert was left shattered, and without any answers as to what truly killed his wife.

Years later, he returned to the abandoned hospital (which still held his wife's cadaver, still in her room) and saw a decorative plant which grew due to the viral infection. The plant had consumed Dorothy's body, causing Albert to envision it as a form of life after death.

He then took on the persona of the psychotic murderer known as the Axe Man, having noticed the plant grew even more when fed animals and later, even took his obsession to the point of manslaughter, feeding some campers to the monstrous being. By then, his physiology had started to mutate, too: he no longer felt pain or cold, even when shot point-blank by a shotgun. He eventually led some survivors from Raccoon City to the hospital, intending to kill them and offer them to "Dorothy".

However, this proved to be a fatal mistake when the survivors became capable of driving him away with heavy firepower, and when they found about the process necessary to vanquish the insane anomaly that had consumed Dorothy. Upon weakening the plant enough, it released the true Dorothy's remains, taking down the hospital with it, as its network of roots were the only things keeping it stable.

Albert was killed by falling debris when the hospital collapsed, cradling the corpse of his beloved wife. 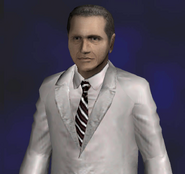 Albert in his younger days 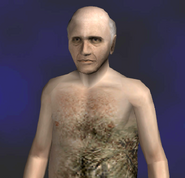 Revealed as the Axe Man 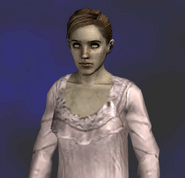 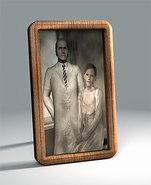 Photo of the Lesters
Community content is available under CC-BY-SA unless otherwise noted.
Advertisement