Capcom Database
Register
Don't have an account?
Sign In
Advertisement
in: Characters, Street Fighter Characters, Articles in need of improvement,
and 7 more

This page details the various forms of Akuma throughout the Street Fighter series and other games.

Shin Akuma, or Shin Gouki (真・豪鬼, Shin Gōki?, "True Strong Spirit"), was created as a secret character and boss in the Street Fighter series. Akuma and Shin Akuma operate very similarly, but Shin Akuma is faster, deals more damage and can throw two Zankū Hadoken at once. Also, his Raging Demon is much faster (making it harder to evade), and in some instances, inflicts more damage (e.g. Capcom vs. SNK 2). In some instances, Shin Akuma also has more life-threatening specials as well (e.g. Misogi). Shin Akuma's appearance is very similar to Akuma's, but he exhibits white hair and a slightly darker shade of skin. In the Street Fighter Alpha series, Shin Akuma had a purple gi instead of a black one, but retains the red hair.

Shin Akuma was introduced as a CPU opponent in Super Street Fighter II Turbo. To face him, the player must reach M. Bison without losing any rounds or using any continues (including having the second player join in) and achieving at least three perfect victories. He will then interrupt the final match by performing a Shun Goku Satsu on M. Bison, before challenging the player's character. As in his later incarnations, he has a purple gi instead of Akuma's standard black gi, is faster, does two Zankū Hadoken at once, and inflicts more damage. But, just like regular Akuma, his name is not displayed below the life bar and he does not have a super meter. Shin Akuma is, however, an unlockable playable character in the Game Boy Advance version of the game, Super Street Fighter II Turbo Revival. Shin Akuma reappears in Street Fighter Alpha 2, but only as a hidden boss. He was made into a selectable hidden character in the console ports of Alpha 2 (the code to unlock Shin Akuma forces the player to move their character select cursor in a "Z" pattern in the PlayStation version and an "X" pattern in the Saturn version). Shin Akuma reappears in the console ports Street Fighter Alpha 3 (and Zero 3 Upper), where his name is displayed as "Shin Akuma" on-screen.

Storywise, Shin Akuma is merely Akuma using the full extent of his skills and power and is almost one with the Satsui no Hadou, compared to the "in-game" version which is Akuma voluntarily holding back his power to avoid ending fights prematurely, but is not a form. In the Capcom vs. SNK games, a different form of Shin Akuma appears. This form of Akuma achieves a new level of power when a dying Rugal Bernstein pours his Orochi power into him. Shin Akuma, not M. Bison, is Evil Ryu's final boss in Street Fighter Alpha 3.

Z-AKUMA, or Z-Gouki (short for ZERO AKUMA, or Zero Gouki), while not technically Akuma himself, was an extremely powerful mech based on him featured in the game Cyberbots: Fullmetal Madness. This incarnation is significant in that its Raging Demon is fully visible to the player.

In Marvel Super Heroes vs. Street Fighter, Shin Akuma was replaced by Cyber-Akuma (Mech-Gouki in Japan), a version of Akuma enhanced by Marvel Comics villian Apocalypse. Cyber-Akuma featured most of Shin Akuma's attacks in the Capcom Versus series style, as well as attacks involving the launching of his mechanical right arm. He later appears in Ultimate Marvel vs. Capcom 3 as an alternate DLC costume for Akuma. He was planned to appear in Tatsunoko vs. Capcom but was dropped.

In the arcade edition of Super Street Fighter IV, Akuma appears in a stronger form called Oni. Also known as Kuruoshiki Oni (狂オシキ鬼 Mad Demon) or unofficialy Oni Akuma, Oni is Akuma after finally becoming one with the Satsui no Hadou and he has disregarded humanity and is also a full demon instead of being a half demon like Akuma with even greater power, becoming a self-proclaimed being of evil incarnate and has no fighting morals in this form. When Akuma is in this form, the prayer beads around his neck have shattered and glow. The tie holding the top portion of his hair is gone, allowing it to flow freely as it gains a bright blue glow. His skin becomes a faded blue and his eyes glow a light red. His facial features have grown even more demonic to the point of growing sharpe fangs and two bumps appear on his forehead, as if they were to grow into horns. He also gains a greater muscle mass as well, but is still very fast, his muscle mass almost matching that of E.Honda. He is constantly surrounded by a dark blue aura of ki with electricity occasionally popping up. When using strong and Focus attacks, his forearms and feet glow and radiate a bright orange ki. Contrary to belief, Oni does not play like Akuma or his Shin variation, but an "evil" version of Gouken, thus requiring the player to approach Oni as an entirely different character than the other Ansatsuken characters. While he has the regular specials associated with Ansatsuken warriors, he can fire a Shinkuu Hadouken from the air and even execute an aerial version of the Shun Goku Satsu, however, Raging Demon sounds more fitting to Oni because he is a full demon instead of a half demon, he also gains the ability to fly with his ki. 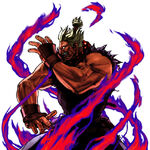