Air Man is a character from the Mega Man series. He first appeared as one of the Robot Master bosses in Mega Man 2.

Air Man will create a large swarm of tornadoes, making it difficult for Mega Man to avoid. If the Leaf Shield touches it, the tornado destroys the Leaf Shield, so Mega Man must time his shots carefully. A Leaf Shield will cause a great deal of damage to him as the leaves clog up his propellor.

While not an actual appearance, Doc Robot copies Air Man's ability and is found in Needle Man's stage. Mega Man could slide to avoid his tornadoes. Doc Robot is weak to Spark Shock or Magnet Missile.

Air Man is one of the Robot Masters in Mega Man II. Air Man will create a few tornadoes and Mega Man can slide to avoid some. Also, touching a tornado can cause the Leaf Shield to be destroyed. Do not try to jump before the tornado moves, as it will damage Mega Man.

Air Man now has his propellor to defend him and creates a large typhoon, shouting out "Yoshi" as he is shooting some tornadoes. Later, Air Man will freeze into the air and suck up junk (similar to the Junk Shield from Junk Man) and his main weakness is the Super Arm. 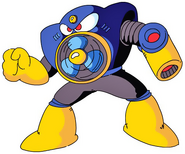 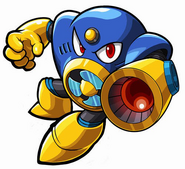 Street Fighter × All Capcom
Add a photo to this gallery
Retrieved from "https://capcom.fandom.com/wiki/Air_Man?oldid=136740"
Community content is available under CC-BY-SA unless otherwise noted.