Agnus is a character from the Devil May Cry series. He is one of the main antagonists in Devil May Cry 4. Agnus is the chief technological researcher and alchemist of the Holy Knights and develops demon-eradicating weapons for the group. He is also the father of Nico from Devil May Cry 5.

Agnus has a demonic form named "Angelo Agnus", or the "One-eyed Dark Knight" (智謀に長けた策士：隻眼の魔剣士, Chibou ni Taketa Sakushi: Sekigen no Makenshi?, lit. "Ingenious Tactician: One-eyed Dark Knight"). The "one-eyed" part of his title comes from a large red spot on his face in place of his left eye, where his monocle would be in human form. Agnus's demon form is based on that of a locust, a common symbol of demons and plagues in the Bible. He has long horns, a halo-like appendage over his head and an insectoid tail sprouting from the back of his head.

Agnus is secretive, introverted and a workaholic, rarely appearing to others. His introverted nature is emphasized by the fact that he is almost always seen in a hunched position, writing notes in his notebook. One of Agnus's distinctive characteristics is a speech impediment that causes him to stutter from time to time; he often stutters if he is angered or under stress.

Normally, Agnus speaks with a soft voice, but sometimes he speaks with a darker, menacing tone, usually when in his demon form. Judging by his behavior, Agnus appears to be temperamental and easily offended; for example, when Nero mockingly comments that Order's research facility is a "hellhole" and wonders about Agnus's presence in the laboratory, the scientist is insulted to the point where Agnus shouts at Nero to "watch his words". Agnus is also seen clashing with Credo, Captain of the Holy Knights. However, he is extremely obedient to Sanctus, obeying his commands and never questioning Sanctus's will. He speaks to Sanctus with a respectful and obsequious, sometimes even flattering, tone. According to Agnus's dialogue with Dante, he has misanthropic views, criticizing stubbornness and foolishness of the human nature.

Despite Agnus' large size, apparent brawn (in both forms) and intellect, he is extremely cowardly. In many instances, he uses his summoned demons to attack his enemies and uses his demon form nearly exclusively as a means of escape. Another example of his cowardice is when he uses Kyrie as a hostage when facing Nero, instead of facing Nero himself.

Not much is known of Agnus' past, other than that he is the biological father of Nico.[1] He abandoned her and her mother, Alyssa, when Nico was around two or three years old.[2]

Agnus was tasked to develop demon-eradicating weapons for the Holy Knights such as the iconic Durandal and Caliburn swords worn by all of the Knights, like Credo. Although the Order of the Sword is dedicated for exterminating all demons, Agnus is authorized by Sanctus, the Order's leader, to conduct scientific experiments with demonic powers. His research facility is located under Fortuna Castle on Lamina Peak, in order to avoid being detected by unwanted trespassers. The pivotal elements in Agnus's research are Vergil's blade Yamato, fragments of the "dark angel" (presumably Nelo Angelo) and Hell Gates. In order to summon demonic entities from the Demon World, Agnus constructed three Hell Gates, specifically on Ferrum Hills, Fortuna Castle and Mitis Forest as the lesser duplicates of the "true Hell Gate" located in the Castle Town of Fortuna. The lesser Hell Gates allowed countless demons, including Berial, Bael, Dagon and Echidna, to enter Fortuna and infest the environment of the island.

Utilizing the experiments, Agnus created numerous artificial demons, including the Gladii, Cutlasses, Basilisks by "cross-breeding" animals with weapons, and the Bianco Angelos by allowing captured human and demon souls to possess the Order's armored suits. As a result, he often uses the Gladius, Cutlass, and Basilisk demons as his weapons. However, Agnus's greatest accomplishment was the Ascension ceremony, which allowed the members of the Order to become demons. The Holy Knights that participated in the ceremony were transformed into the Alto Angelos, while Agnus and Credo possess the angelic demon forms. Agnus's demon form is known as "Angelo Agnus the One eyed Dark Knight".

Agnus is first seen in the Headquarters of the Order of the Sword as Sanctus, assassinated by Dante, is resurrected through the Ascension ceremony, gaining demonic powers in the process. Agnus arrives to the Ascension chamber and congratulates his Holiness for recovering, but he is also somewhat nervous and irritated, because Credo sent Nero to bring Dante to justice. Agnus considers Nero's journey to capture the infamous devil hunter a potential threat, because Nero could discover the Order's laboratory under Fortuna Castle and expose Agnus's research. However, Credo states that the Order's highest priority is to capture Dante for now.

Nero later stumbles upon Agnus's research facility, only to be sealed inside a containment room. Agnus appears to introduce himself to Nero, but then he sends the Gladii in to kill the intruder. Nero breaks the protective glass in the chamber and interrogates Agnus, who is fascinated by Nero's Devil Bringer. Agnus explains how a few years ago Sanctus ordered him to start his research, because Sanctus is plotting to take over the world by harnessing demonic powers. Nero comments to Agnus that Dante killed Sanctus, but the scientist responds by saying that Sanctus has been resurrected. While talking, he takes Nero by surprise and nails him to the wall by the Bianco Angelos. Agnus continues to explain how challenging it is to summon and capture demons. Nero realizes that Agnus created the lesser Hell Gates, and the researcher introduces his plans for using Nero as his newest test subject. When Nero refuses, Agnus stabs him with a Gladius sword and orders the Bianco Angelos to dispatch him. Agnus's attempt to kill Nero triggers his Devil Trigger while restoring the broken Yamato in the room and destroying the Bianco Angelos in the process. Shocked at this turn of events, Agnus transforms into the demon form and escapes to the Order's HQ building.

Agnus meets the Order's officials, Sanctus, Credo and Gloria, and accuses Credo that he was aware of Nero's demonic powers. Credo dismisses the accusations, even though Agnus informs him that Nero resurrected the Yamato. Credo is sent to arrest Nero and reclaim the blade on Sanctus's suggestion, and Agnus informs Sanctus that Nero is apparently close to Credo's younger sister Kyrie, as he heard Nero shouting her name in the research facility. After Nero defeats Credo and Kyrie has seen the Devil Bringer for the first time, Agnus arrives to the scene and comforts her by saying that he is trying to protect Kyrie; however, this turned to be a ruse in order to take her hostage while everyone is distracted. He explains that His Holiness had foreseen Credo's defeat in Nero's hands and ordered Kyrie to be used for Sanctus's further plans. Agnus changes to his demon form, kidnaps Kyrie and flies away to the HQ. Nero pursues Agnus to save Kyrie and challenges the scientist to a fight. Despite his demonic powers, Agnus is defeated by Nero, when suddenly the Bianco Angelos arrive to distract Nero. Sanctus, appearing in an armor of an Alto Angelo, instructs Agnus to "prepare for activation".

Later, when Kyrie and Nero are absorbed in The Savior and Sanctus has reclaimed the Yamato, Agnus uses the blade to open the true Hell Gate, once sealed by Sparda. By doing this, he unleashes countless demons to wreck the Castle Town of Fortuna and terrorize the citizens. It is all part of Sanctus's plans, who uses the power of The Savior to annihilate the demons.

Much later, after Dante has already destroyed the lesser Hell Gates, he confronts Agnus to claim the Yamato. Agnus and Dante first act out a mocking play before engaging in battle. Ultimately Agnus is defeated by Dante. Dante explains that he was the victor, because Agnus had surrendered humanity for demonic power. Agnus is left puzzled at why his demon form is still inferior to the half-demon Dante, who says that demons are missing something that humans have. Agnus becomes puzzled begging for Dante to reveal the weakness, but Dante shoots the research notes with Ivory making the scientist panic. Agnus peers into the hole in the notes, made by Ivory's bullet, and witnesses Dante pointing at him with the pistol. Dante mockingly instructs the scientist to "do his homework first" if he is going to continue his research in the afterlife. Dante then pulls the trigger and shoots Agnus in the eye, killing him. Afterwards, Dante reclaims the Yamato and uses the sword to shatter the true Hell Gate.

Serving as the the Holy Knight's Chief Technology Researcher and Alchemist, Agnus is known to be a highly intelligent individual. Having created many of the Demons used by the Holy Knights & various Hell Gates only showcases his intellectual prowess. He also possess a deep understanding in demonic forces. In his human form, he possess little abilities. Though he seems to be able to summon and control his self-crated Cutlass, Gladi, and Basilisks Demons.

In his Angelo form, he's a powerful Demon Summoner. As a demon, he is able to summon his self-created Gladii, Cutlass, and Basilisk demons to do his bidding and aid him in combat. Agnus can also partially summon a group of Basilisks to shoot deadly fireballs, and drain his opponent's health to replenish his own vitality. Despite his power, however, he is no match for either Nero nor Dante.

The Gladius is an artificial demon created by Agnus through magically cross-breeding a sword with a reptile. It is capable of flight, and can transform its entire body into a bladed weapon able to be wielded by others. If damaged, it will drop to the ground in its weapon form, where it can be picked up and thrown at a locked-on enemy using Nero's Buster. Agnus wields them both in his human and Agnus Angelo forms, and his own Buster moment involves being impaled with the demons.

The Cutlass is an artificial demon created by Agnus through magically cross-breeding a sword and a fish. Its dorsal fin, an incredibly sharp blade, allows it to cut through earth, stone, and metal, effectively allowing it to swim through solid land. They attack by diving out of the ceiling or floor, but if damaged they will remain knocked out on the floor. Agnus wields a Cutlass in his Agnus Angelo form.

The Basilisk is an artificial demon created by Agnus through magically cross-breeding a gun and a dog. It is able to fire its fiery skull from its body like a bullet, and then regenerate a new one. Agnus is able to summon six Basilisks at a time and use them as an army while in his Agnus Angelo form.

Agnus was not originally in the game, and was instead first seen in a card added with the Day of Nightmares pack. 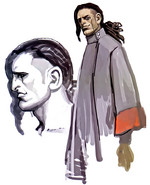 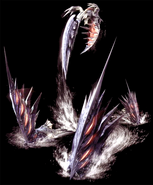 Basilisk Group
Add a photo to this gallery
Retrieved from "https://capcom.fandom.com/wiki/Agnus?oldid=137510"
Community content is available under CC-BY-SA unless otherwise noted.