Capcom Database
Register
Don't have an account?
Sign In
Advertisement
in: Characters, Devil May Cry Characters, Bosses,
and 4 more

Agni and Rudra are characters from the Devil May Cry series of action games who made their debut as bosses in Devil May Cry 3: Dante's Awakening.

Agni and Rudra are a pair of demonic swords wielded by demon hosts who they use to fight on their behalf. They also serve as two of the many gatekeepers of the Temen-ni-gru an ancient demonic structure sealed away by Sparda nearly 2000 years ago.

Dante comes across the brothers in the Firestorm Chamber. They are at first cordial to Dante, discussing how to be "gracious hosts", but when he demands to be let through their gate, they attack. After Dante defeats them, they ask to be taken with him as Devil Arms, and Dante agrees on the condition that they remain quiet, which they repeatedly fail to uphold, for which they are punished. 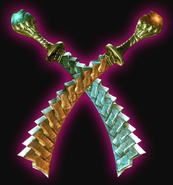 Agni & Rudra with their hosts as they appear in game.
Community content is available under CC-BY-SA unless otherwise noted.
Advertisement