Adventures in the Magic Kingdom

Adventures in the Magic Kingdom is a game developed by Capcom for the NES, released in 1990. At the time, Capcom had a license to produce Disney games, and had much success creating games based on Disney movies and characters.

This game is unusual in that it was based on the Disney theme parks, and featured a generic "boy" protagonist.

The development of the game was based on the Disneyland theme park in Anaheim, California, which is sometimes referred to as the "Magic Kingdom".

This name, however, is actually the name of a specific theme park which is part of the Disney World theme parks in Orlando, Florida, and this is the park depicted on the cover art.

Like other NES Disney-licensed titles, this game lacks a credits sequence for the game's staff. Music composition is confirmed to be done by Yoko Shimomura through her official website. 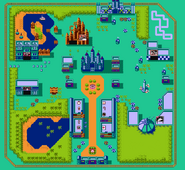 Map of the park
Add a photo to this gallery

Scandinavian box art
Add a photo to this gallery

Retrieved from "https://capcom.fandom.com/wiki/Adventures_in_the_Magic_Kingdom?oldid=140131"
Community content is available under CC-BY-SA unless otherwise noted.