Adventure Quiz 2: Hatena? no Daibouken (アドベンチャークイズ2 ハテナ？の大冒険) is a quiz arcade game released in 1990. In 1992 it was ported for PC Engine Super CD-ROM² alongside Adventure Quiz: Capcom World in a single disc.

The game features the character Hatena, who goes on a great adventure in seven maps. Characters from Kamen no Ninja Hanamaru have a guest appearance in the game as enemies.

Adventure Quiz 2, like many other games during this era of gaming, credited its staff in its default Score Ranking Table, which is as follows: 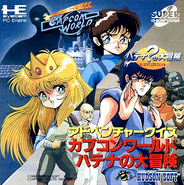 Add a photo to this gallery
Retrieved from "https://capcom.fandom.com/wiki/Adventure_Quiz_2:_Hatena%3F_no_Daibouken?oldid=134170"
Community content is available under CC-BY-SA unless otherwise noted.