Capcom Database
Register
Don't have an account?
Sign In
Advertisement
in: Games, Board Games, Quiz Games,
and 4 more 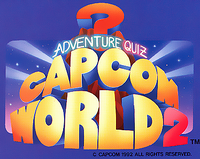 Capcom World 2 can be played by two players, with both players given the chance to answer the same question simultaneously. The player begins by being asked to choose from one of four different characters: Wing the Warrior (戦士・ウィング) can sometimes score two points by answering a single question correctly; Pure the Mage (魔法使い・ピュア) has the ability to select the genre of her questions; Fur the Cat (猫・ファー) can sometimes eliminate one or two wrong answers from his choices and Lyric the Priest (僧侶・リリック) is more likely to recover energy than the others with correct answers. After selecting the character, the player chooses between three different courses to determine the difficulty of the questions: Beginner, Normal, and Expert.

Each stage consist of a board game-like map in which the objective is to reach the final panel and confront the boss of their quiz challenge. The player moves their character by throwing dice, which determines the number of steps their character will take and on which panel they will land. On each panel, the player is challenged by a Capcom character to a series of questions. Some characters will offer awards for answering their questions (such as extra points or health), while other characters will give players some kind of benefit to answering their questions (such as allowing the player to choose the genre or reduce the number of possibilities).

Capcom World 2 takes place in the fictional world of the Capcom Kingdom, a once peaceful land that was protected by three Dragon statues symbolizing Love, Courage, and Wisdom. These benevolent deities guarded three radiant Crystals, until they were stolen by a mysterious villain, turning the Dragons into ferocious beasts. In order to defeat this villain, four young heroes decide to embark on a journey to the villain's three castles, each containing one of the three Crystals guarded by its dragon. On their quest the heroes are assisted and fight against numerous Capcom characters.