Abel (アベル,Aberu) is a character from the Street Fighter series who made his debut in Street Fighter IV. He is a french martial artist described as an amnesiac, a "man with no past", who obsessively follows every lead on the whereabouts of Shadaloo's remnants.

Abel was found in an abandoned Shadaloo base suffering from amnesia and raised by a mysterious soldier. Abel claims that the man who found him died recently, and Abel feels that he has had no family. After finding a stray puppy and taking him in, he starts a journey of discovery to find who he really was and where he came from, after which he says he will be able to name the dog. He first goes to the detective, Chun-Li, who is investigating Shadaloo. Upon hearing his connection to Shadaloo, she recommends that he participate in the S.I.N. Tournament to learn more about his past.

During the course of the tournament, he comes across Guile, who is able to use the moves the soldier he was nursed back to health by had used. When Abel recognizes Guile's techniques, Guile realizes that Abel must have known Charlie, and immediately starts pressing him for answers. Abel refuses to reveal secrets to someone he's never met before and their fight escalates. Guile then learns that the man who saved Abel could use the Sonic Boom, and tells Abel that it must have been Charlie. Abel also encounters Fei Long at some point, and the movie star is impressed with the mercenary's ability. Abel eventually arrives at S.I.N. headquarters around the same time as Guile and Chun-Li. As Guile races to rescue Chun-Li from Vega's trap, Seth (or one of the 26 copies of Seth) stops Guile in his tracks. Abel tackles Seth, allowing Guile to reach Chun-Li before she dies. Abel is surprised to find that he and Seth look identical. Abel is called "imperfect" as Bison appears from behind and destroys "Seth". Bison allows Abel to leave unharmed for unknown reasons. Abel is later seen looking at the ruined S.I.N. base with Guile and an unconscious Chun-Li.

After the tournament, Abel informs Chun-Li that he's going to go on another journey to find more answers. He also goes to Fei Long, warning him of the dangers he may face from S.I.N. and offering to help.

Abel has a very aggressive fighting style, and uses Combat Sambo (Russian wrestling with military elements) and various MMA styles mixed with Judo, according to the Street Fighter IV Strategy Guide. Abel is mainly a grappler, and many of his moves either chain into a throw or set a foe up for one; several moves also take advantage of the foe's direction. Since he moves rather slowly, one would assume he would have a difficult time getting close enough to throw an opponent; however, most of his techniques get him either behind an enemy or right in their face. Abel is also capable of grounding airborne foes, getting very close in the process. Abel is a strong character who needs to get close to finish a fight, and has plenty of moves to achieve that end.

Because he has great combo potential, several grabs and lacks a projectile, Abel is generally played as a mixup-based character. He is also equipped with a good variety of crossups and overheads, an anti-air grab and a command grab; this makes Abel great for keeping opponents guessing, and punishing their mistakes. 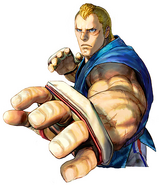 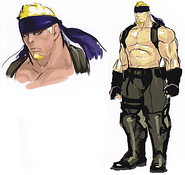 Street Fighter X Tekken
Add a photo to this gallery
Retrieved from "https://capcom.fandom.com/wiki/Abel?oldid=102521"
Community content is available under CC-BY-SA unless otherwise noted.