1943: The Battle of Midway, known in Japan as 1943: Midway Kaisen (1943: ミッドウェイ海戦), is a vertical scrolling shooter arcade game released by Capcom in June 1987. Capcom released their own port for the NES (subtitled The Battle of Valhalla in Japan for the Famicom). The game has also been ported to the Atari ST, the ZX Spectrum, the Amstrad CPC, the Commodore 64 and the Amiga. In 2005 it was re–released for Xbox and PlayStation 2 as part of Capcom Classics Collection, Capcom Classics Collection: Reloaded on the PlayStation Portable and most recently on Capcom Arcade Stadium for the Nintendo Switch. The overall faithfulness and quality of execution of these third party versions varies greatly. 1943 is the second game in the 194X series, following the successful 1942. 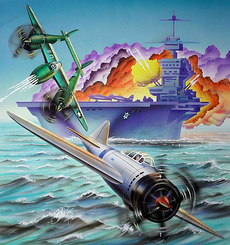 The game is set in the Pacific theater of World War II, off the coast of the Midway Atoll. The goal is to attack the Japanese Air Fleet that bombed the players' American aircraft carrier, pursue all Japanese Air and Sea forces, fly through the 16 levels of play, make their way to the Japanese battleship Yamato and destroy her. 11 of the levels consist of an Air-to-Sea battle (with a huge battleship or an aircraft carrier as an End-Level Boss), while the other 5 levels consist of an all-aerial battle against a squadron of Japanese bomber planes and a larger bomber that needs to be destroyed.

As in 1942, players pilot a Lockheed P-38 Lightning. Two buttons are used: one for standard fire (with several weapons) and one for special actions that executes either a loop, like in 1942, or one of three special attacks that damage the plane, as well as all on-screen enemies. Unlike 1942, the player only has one life, with one refillable energy meter. Destroying a complete formation of red enemy planes will result in a power-up, such as a health boost or a temporary special weapon which replaces the default guns. 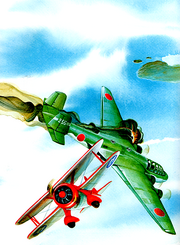 This updated version was released exactly one year after the original game's debut. 1943 Kai is an enhanced, "wild" version of 1943 that was made only available in Japan under the name 1943 Kai: Midway Kaisen (or 1943改: ミッドウェイ海戦). Most of the graphics and sounds have been reworked, the weapons have been made more extreme and some fairly strange things (laser-firing WWII planes and ships that run on ground) have been added. The trademark P-38 has been replaced with a biplane, the Boeing-Stearman Model 75.

This version was ported by Naxat on the PC Engine as 1943 Kai. It was not available on the U.S. TurboGrafx-16. The PC Engine port contains 5 additional levels (but only 8 of the original Kai levels) and original music. The history of this game in PC Engine is the same as the NES version, but your "biplane" is equipped during this action and the fight with new exclusive enemies and bosses. Though it was never released in the U.S. in arcades, it was included in Capcom Classics Collection for PlayStation 2 and Xbox in 2005.

1943: The Battle of Midway and 1943 Kai features a variety of pick-ups and weapon upgrades. Each weapon upgrade is temporary (20 seconds usage), but it can be extended by picking up either a different weapon or an icon of the same weapon type. Weapon usage time limit maxes out at 64 seconds (80 seconds for 1943 Kai). Some weapons can be upgraded for increased firepower.

NOTE: Because the credits are unchanged for Kai, any and all new staff members are uncredited - which at the very least includes the six composers of the game's eight new tracks (as mentioned in Daimakaimura -G.S.M. Capcom 1-): Tamayo Kawamoto, Harumi Fujita, Junko Tamiya, Manami Matsumae, Takashi Tateishi and Hiroshige Tonomura.

Additionally, 1943, like many other games during this era of gaming, credited its staff in its default Score Ranking Table (the same table is also used for 1943 Kai), which is as follows: